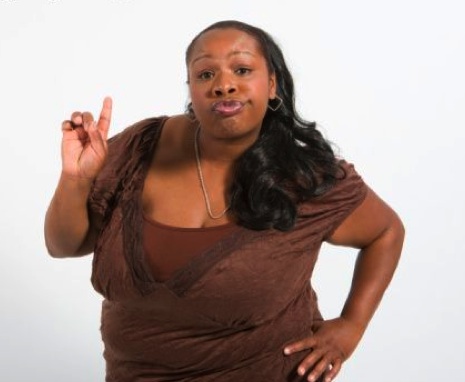 5’-4”, 265lbs and growing, I mean evolving and get this, her nick name is Cookie.  WTF!  More like The Cookie Monsta.  If another woman name her child after food again I’m gonna cut somebody.  Cookie is a gentle midget with a giant size appetite, which is huge to say the least.  This poor child lives in constant fear and thinks nothing but the worst, 24/7.  Mini bite has a strong desire for food and thinks all fast food restaurants will run out of food if you don’t get there early, except for White Castles.  SMH, don’t ask…

Just know that food is her comfort zone.  It’s key when trying to calm a bitch down especially if she gets excited.  Monsta wakes up with food on her mind eating macaroni & cheese for intercourse, I mean for a snack just before breakfast and washing it down with a diet coke.  A 24oz of diet coke which she pours and then sips out of an empty mayonnaise jar.  No straw is necessary cause it takes to damn long to get inside her mouth.  She only sips when people are around.  Turn your head and the sound affects will spark fire works and blaze then set a fire.  Who needs a big gulp cup when you got a mayonnaise jar tied to your hip as if she’s at a stadium watching a football game or somethin? 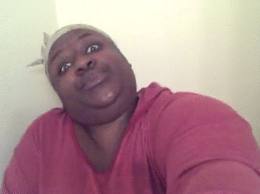 When Cookie didn’t have any gas in the house, because she ate, I mean spent the scanner bill money at Red Lobster, Lil M’s only way of cooking was through the usage of her microwave.  With crab legs and scrimp just sitting, wasting away in the freezer along with her stomach growling; talking to her, convincing her to do the right thing Cookie decided to season up, cook her some scrimp n crab legs and placed the microwave on “Cook” and set the level on  “Hi mode”.  Big bitch shyt.  One could see her standing in front of the microwave, rockin back and forth doing the phat gurl dance & yelling “Hurry up and cook”.  Who does that kind of shyt?  What type of greedy ass muthaphucker cooks raw scrimp and crab legs in the microwave? I pray a chick grow two heads fo some dumb shyt like dat.

Claiming to be on a diet, cookie can be found at any local Burger King drive thru leaning out the car window yelling her food order.  Talking bout she don’t care if they’re still serving the AM menu, shyt she wants a double Whopper with everything on it and she wants it now (but its 8:00am mame).  “I’m a paying customer get me the manager and make sure you put cheese on dat shyt too”. Yup, she’s greedy and mean with it.  I stay out the way and say they gonna learn.  She got the manager trained.

Cookie parks the car only to run inside to holla at a bitch for phuckin up her order and to sneak some soda.  I’m watchin Cookie holdin tight to her mayonnaise jar, heading for the door for a quick refill without permission.  Let’s be clear, no ice all liquid.  She said the ice takes up too much space, in the jar, therefore cheating her out of good soda; as she pretends to be heading towards the bathroom. I let her do what she does cause she’s paying.

Can I ask a question, huh?  Um, who brings an empty mayonnaise jar to Burger King?  No, who allows themselves to be seen walking into Burger King with an empty mayonnaise jar strapped to their hip like a cell phone?  Who does that kind of ghetto shyt?  I’ll tell ya who.  The Cookie Monsta does and you betta not say one word or she will roll on dat azz and set you straight.  ( or is that set you flat?)  Anyway, you get the point.

I’m sorry but 265lbs with gravity playing a role to her advantage is more like 300lbs after Brunch which is intimidating without Baby M opening her mouth.  Monsta told me that I’m too puny for her, (thank god) and a real man could just sweep her off her feet.  Shyt, I was gonna use a broom.  I guest that’s why she’s single cause ain’t no real man with common or sense would dare to try.  If sistah friend is trying to take a shot at my manhood then I’ll just have to take the L cause I already have scoliosis; curvature of the spine, and she ain’t breaking my shyt da phuck up, just to prove a point or just because.  Oh, hell to da nah.

I ain’t desperate or lonely.  Well let’s just say I’m not desperate. Plus, the smell that will stay on a Brutha’s Jimmy is not cool nor is it worth it.  They haven’t even made soap that can kill or mask the smell.  I can see me now walking in a store and nicca’s inside the store look at each other and say “Yo, you smell dat shyt”?  Knowing good and damn well it would be me they’re talkin about.  I could phuck a nicca up fo takin shots or just even thinking about it.  Don’t judge me.  I was lonely and lonely has a price I tell ya.  (Scratches his head)  Wait, that wasn’t me.  I was talking about a friend of mine.  Yeah, that’s it-it was my boy Nyjile.  Nyjile hit it during the basket ball season.  Yeah, that’s it. Nyjile is like Mikey he will hit anything.  Trust me when I tell ya.

I aint got nothing to prove or to hide.  You should talk her two BFF’s Butta and Gushy.  Side bar, who names their child Butta?  What type of person calls himself Gushy?  Wait!  I can’t… I don’t need that kind of visual in my head; only in the projects and only in the south.  I swear.

When I tried to lookout and pull her to the side just to let her know she has some BBQ chicken stuck to the side of her face she flipped on me saying, “That’s 4 later hater” then added “Don’t judge me” rolled her eyes and ate dat shyt right derr in front of me.  She didn’t even offer a nicca some or even turn around to play it off.  Hold up, I ain’t stupid she said that was fo later.  Think I wouldn’t remember.  I like Barbeque, was hungry too, my stomach growls also.  So I straight told her, I was like “Damn girl can you brown bag it or wrap dat shyt like take out, bitch”?  She said, “No” and kept chewing.

She’s the typical Cookie Monsta the one that loves to sit and direct traffic, talk bout drama, gossip and hearsay.  Monsta, Gushy and Butta be passing wet spit blunts and drinking 40′s out of the same spit bottle.  Real nicca’s don’t do cups.  If you ask me I think smoking and drinking behind another person is like tongue kissing a nicca; just pure saliva sharing, sampling and swappin.  Smacking her lips talking bout “Gushy you had the rib combo right?  Yeah, I could taste that shyt.  I’m like, where’s the bathroom I’m about to throw up.

Cookie can be sweet at times, after lunch.  She dropped out of school when she was in the 9th grade.  She couldn’t get a job without any real education so she started making money doing eye brows.  She was good at tracing shyt so why da phuck not trace n draw eyebrows on peoples face.  Cookie stayed on her hustle. Nahmean!

She heard that older men would pay top dollar just to have fun with her by playing hit or miss. Yeah, hit or miss I remember that game well.  Men would line up but some would cheat and throw flower on her ass and aim for the wet spot.  Sometimes the wet spot just be da wet spot and not the right spot if you know what I mean.  Hey I’m not one to judge she made good money besides even a turd can float to the top and win.

Now I’ve told him about that shyt on the side of his mouth and don’t ask me what’s that stuff in the corna of his eyes but Cookie likes it and that’s all that matters.

I heard Cookies ex-boyfriend is currently doing time.  Not sure for what but it had something to do with sitting in the car smoking that diesel, watchin young girls play in the park.  Yeah, you didn’t hear it from me but he was suppose to be rubbin on his shyt, arousing himself while checkin out the pretty, soft, tight skin, baby hair waving, sexy jean wearin, have to be home by 7pm younins.

His street name is Goon.  Goon was lookin for dat fountain of youth to drink from, whateva that means.  The last time I saw Goon he told me that the ole silver dollar don’t bounce off of Cookie like it use to.  He said it just sinks to the bottom.  I was like Goon spare me the graphic package.  I asked him to explain what he meant but a little school girl in a skirt passed and that was the last I saw or heard from him.  An hour later, helicopters, police sirens and lights flashin had da hood buzzin for weeks.  All I know I ain’t going to visit nobody in maximum security.

I’ll holla at ya’ll later and remember, you didn’t hear nothin from me. Ya Heard!

Ayo! Shorty.  Yo, Cookie you hear me calling you girl.  Slow down mama, what you eatin?

Heaven is at the foot of Mother….